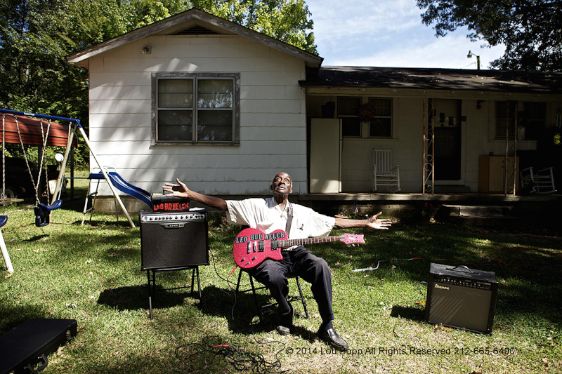 Chicago: August House Studio presents “The Mississippi Delta Blues Project.” Opening Friday, May 2, 6:00 – 9:00 PM and on exhibit through Saturday, May 24. The Mississippi Delta Blues Project is a photographic exhibition of the faces, places, talent and tragedy that define a unique American music genre – the blues. Artist Lou Bopp spent more than three years on the Delta Blues Trail capturing a generation of musicians who played a critical role in the development of the Blues and influenced performers worldwide. Portraits of musicians, some still performing, in juke joints and neighborhood saloons; the exhibition records the end of an era and pays tribute to the legends, locations and culture of the Mississippi Delta Blues.

Lou Bopp, a commercial photographer based in St. Louis & New York, began his career at Sports Illustrated in 1992. His work includes assignments for corporate clients, Time Warner, Deutsche Bank, McCann-Erickson and Amex. Published work has appeared in Time, Newsweek, The New York Times and Money among many others. He was cinematographer on the Blues documentary “We Juke Up in Here” (2012) and his photographs were included in The Hidden History of Mississippi Blues by Roger Stolle. (The History Press, 2011)

August House Studio opened its doors in 1987 and is located in the heart of Roscoe Village. Dedicated to making art part of everyday life, August House Studio presents up to 12 gallery exhibitions a year. Focusing on 2-D contemporary and regional art, shows feature both solo artists and themed presentations on subjects ranging from baseball to birds. Marya Veeck, Painter, owns and manages August House Studio.