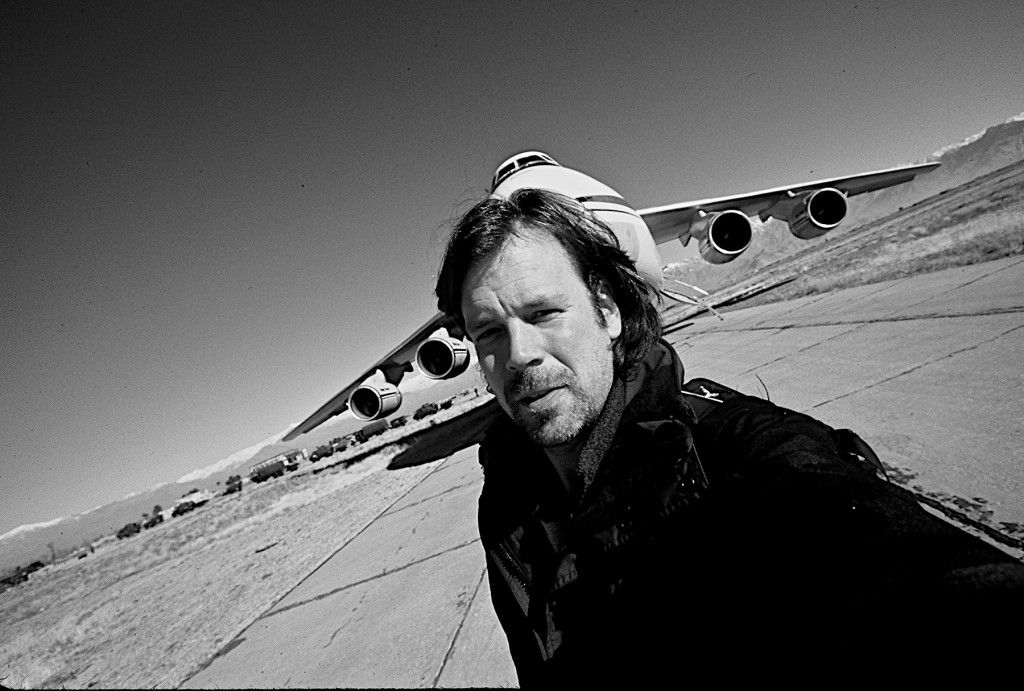 I just saw a post on the Antonov, the worlds largest production plane and the heavy weight champion of the skies, over on FB yesterday and posted a portion of the following and thought I’d do the same here with a little bit more of a personal touch.

I rode in an #Antonov for about 18 hours from #Rome to #Kabul in 2002. As we landed at the gas station in #Turkmenistan, to either jettison or to buy more fuel, ugh I wish I recalled the reason for this stopover, it was a good one. Anyway, I noticed that it was being flown by 6 very young Russian dudes, we’re talking acne & all, jus kids. The plane had no windows and the payload, other than a group of 6 of us was Italian military vehicles & arsenal. We sat on airplane seats that were NOT bolted to the floor. But we had to wear seatbelts haha. Fun! And we were surrounded by #Playboy centerfolds taped to the walls i.e. inflight entertainment.

Although the plane was humongous we were led to the very back of it and up a very high and straight ladder through a small hatch door and into a small “room”. Ha, and I thought that we’d have the run of the plane! Once all of us climbed through, with little or no luggage because it wouldn’t fit through the hole, with no commentary, no have a great flight etc. the hatch promptly shut. I could hear and see it screwed down and knew at that point that I was stuck. The was no form of communiqué with flight crew or the outside world, we were committed.

There was nothing but the aforementioned un bolted old airliner seats, a small WC that was exposed to everyone and one lightbulb that dangled from the ceiling hardly hanging on by a frayed wire that swung like crazy in turbulence, there was a lot of turbulence. That bulb was our only source of light, and warmth for that matter, we froze our ass off up there in that little pod! We ended up taping the wire to the ceiling to prevent the wild & huge swings, and to keep it from smashing on the wall. I was obsessed with that stupid light bulb and not letting anything happen to it.

Since there were no pre flight or in flight announcements, we were clueless and somewhat sensory deprived. I could hear the engines whine & roar and I could feel the beast move about, but after about 3 hours we had no idea if we had even taken off yet. Until we did! And then there was no mistake about that plane taking off, my hair was standing up, talk about a power trip!

We flew for about 12-14 hours and finally landed in Turkmenistan. I actually thought the we were in Bagram, but what did I know, we were just along for the ride, simply nobodies. The crew did come and let us out of our pod in Turkmenistan, but we couldn’t disembark. The Turkmenistan custom agents boarded and searched, brought dogs on board etc. They weren’t messing around and not the friendliest folks that I’ve met. It was freezing, they had on their fur hats & coats and asked us all questions. And that is why they let us come down from our pod.

While we were free I decided to stand at the doorway of the plane and hang with one arm and lean out to grab a sat signal to make a call home. I was on that call for about 2 minutes before one of the agents on the ground noticed me and he came running over and went crazy and not in a kind way…….pretty soon I was by far the most popular human on that aircraft, if not the country! That interaction delayed the flight by about an hour as I got bumped into a higher level of interrogation. Apologies & lessons learned I said. They ended taking the bat for the sat phone and gave it to the pilot and gave me the body and “locked” us back upstairs. Me being me, the first thing I did was to pullout one of the backup bats and made a call, now that I hand some privacy. It was spotty, but it worked, near the toilet.

To land we had to corkscrew, or spiral land at Bagram Air Force Base just outside of Kabul. It only took the lads 5 or 6 attempts to line up the runway, every miss tacked on about an hour while we climbed out half way to Turkmenistan and into outer space then came back and tried again. And again. I later learned that it was the flight crews first time into Bagram and because it sits in a bowl like environment and it’s a method that’s better than a slow nice & easy decent into a hostile airport, as it’s intended to minimize the risk of being nailed by anti aircraft fire. With a corkscrew you start out at a very high altitude. Then descend steeply, rapidly, in a banked spiral pathway. And hope that you have the runway lined up properly. Surface-to-air missiles no bueno.

Once we landed I was able to get in the cockpit and meet the crew and apologize for the delay in Turkmenistan, my bad. To my surprise the mood was a LOT less tense at that point, now that we were there. I got to chat with the pilots and hang out in that beast as we waited for the mobile Afghanistan Customs truck to pull up next to us. Once they did, we were allowed to disembark and that’s when I made the photo below, which btw MAY be my first selfie ever, sigh. Two things happened after I snapped this image. 1) I got yelled at for taking photos, 2) Moments after I snapped this image I heard explosions and immediately tossed myself to the ground! It turns out that the Brits were clearing landmines on the other side of the airport and detonating them. No one else flinched, except those that noticed & laughed at my awkward bounce on the tarmac lol.

In hindsight it was kickass flight, but only in hindsight lol! On the way home I got a ride to Karachi on a UN flight, then to NYC via Pakistani Air, seat 1A. From worst to first and a dream trip for this industrial photographer / on location commercial photographer!